CHURCH OF THE ANNUNCIATION, RATHFARNHAM

Our church, opened on the Feast of the Annunciation, 25th March 1878, is dedicated to the Annunciation, celebrating the announcing by the Angel Gabriel to Mary that she was to give birth to Jesus, thus becoming the Mother of God.

“…and her came to her and said, “Greetings, favourite one!  The Lord is with you”.

These words are repeated in the beginning of the “Hail Mary” prayer, “Hail Mary, full of Grace”, and in the opening of the Angelus prayer, “The Angel of the Lord declared unto Mary..”

When visiting the church, you might take a look at the front panel of Our Lady’s Altar 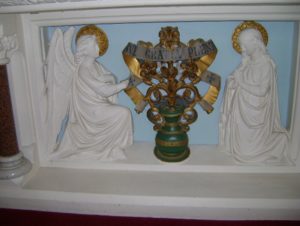 This front panel is just one example of the artistic work of the firm Farrell and Sons of Dublin, (1844 to 1901) who created the altars and the art work all around the sanctuary.  Look also at the front panel of the main altar, and compare it with some of the sculptures created in Dublin in the late 19th century.  Compare the main altar especially with the depiction of the Battle of Waterloo as shown on the base of the Wellington Monument in the Phoenix Park. 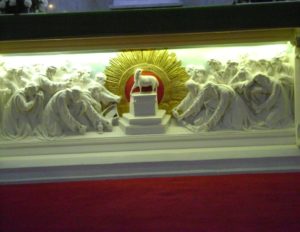 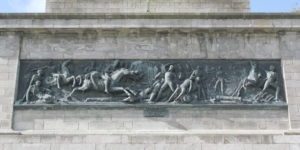 In our church sculptures, the Farrell family – taking the theme of the angel’s announcement to Mary – have placed many examples of angel faces around the sanctuary, with four large angel figures seated up high on the curved wall around sanctuary. 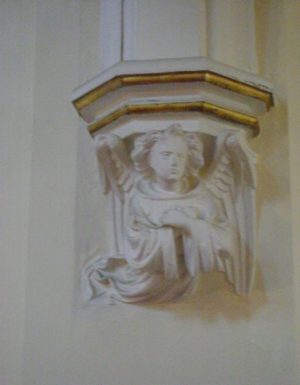 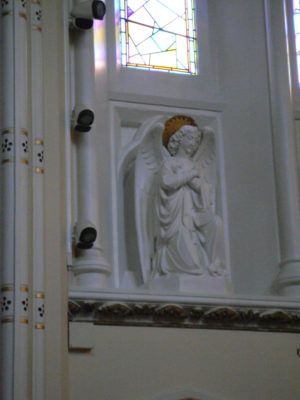 Now compare these angels with the statue of Daniel O’Connell in O’Connell Street, Dublin surrounded by four angels – also the work of the Farrell Family. 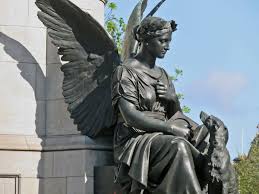 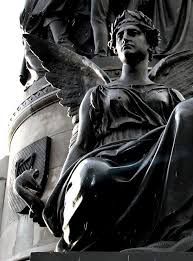 The angels’ theme was emphasized in the homily at the opening ceremony by the renowned Dominican preacher, the Very Rev Thomas A Burke, when he said…

“The Lord Himself would remain in this tabernacle all day long waiting for His children to come to Him in their joy, and in their sorrow that He might help them carry their cross.  And throughout the long nights, with the lamp slowly wasting its life away in a golden flame, still He, the light of Heaven, remained for our love, and within those silent walls legions of angels would pay their homage to God until the morning broke, and the sound of the bell called faithful souls to take their place”.

Rathfarnham Church of the Annunciation
We use cookies to ensure that we give you the best experience on our website. If you continue to use this site we will assume that you are happy with it.OkPrivacy policy